An article published today in letsrecycle.com states that exports of RDF look set to top 2.75 million tonnes when the final figures from the Environment Agency are released in the coming weeks.
As one of the largest exporters upto November 2015, Andusia’s Co-Director Steve Burton was asked to comment on the increase in exports and what the future looks like for 2016. He stated:

“My expectation for the annual figure is approximately 2.75m tonnes for 2015, which is a 16% increase on 2014.
I certainly don’t see much of an increase for 2016, but more changes between exporters. I see this quantity restriction having an upward pressure on pricing.”

One of Andusia’s key strengths has to be its ability to maintain a leading position in a market that now exports to over 12 European countries between 55 operators. It hopes to maintain this position as eyes turn to the Domestic market over the coming years. 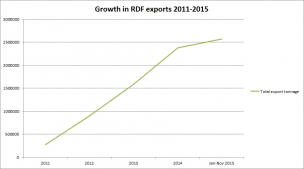