On 21st February 2017, Andusia Recovered Fuels Limited celebrate’s its 5th anniversary. We have come a very long way in the five years we have been operating, and we’d like to take this opportunity to reflect on what has been a highly triumphant time for Andusia.

Since its establishment in 2012, Andusia have developed a strong supply base of professional UK waste management companies, alongside developing and maintaining long lasting relationships with some of the largest and most prestigious combined heat and power (CHP) plants in Europe. By making good use of waste instead of allowing it to go to landfill, Andusia is benefiting its society and the environment. We are meeting both the UK need to remove excess waste and the demand elsewhere in Europe for processed RDF to power CHP (Combined Heat and Power) plants.

During Andusia’s first year of trading, we exported around 13,000 tonnes of RDF and were the UK’s 13th largest exporter. By 2016 we were established as the UK’s largest independent exporter and recently saw our 800,000 tonne barrier broken.

“When Stewart and I started Andusia RFL 5 years ago, we could not have foreseen how successful the enterprise would be. Commentators were predicting that the RDF sector would only last 3-5 years, but as can be seen from the Environment Agency figures, the sector is continuing to rise 6 years after the first RDF was exported, and Andusia continue to be a major contributor to the sector.” Comments Andusia’s Director, Steve Burton.

Andusia couldn’t manage the whole process without being backed by a dedicated and experienced team.  Earlier this year we saw our staff numbers rise from 8 to 13 people together with us doubling our office space to accommodate the increased numbers.  But it’s not just our team that have helped us get where we are today, our suppliers and customers have also taken part in helping us be hugely successful and for that we thank you all. Maintaining our reputation and keeping trustworthy relationships is extremely important to us, and it has led us to increased market opportunities.

With Andusia’s impressive overseas sales growth, growing from £2.6m to £18.1m within just five years, Andusia have been recognised for its outstanding results in innovation and international trade resulting in winning such significant awards as The Sunday Times SME Export Track 100 2016, and The Sunday Times Virgin Fast Track 100 but a particular highlight for Andusia was being presented with the Queen’s Award for International Trade, an industry sector first, where both Directors Steve and Stewart were invited to Buckingham Palace to meet the Queen and further be presented with the award by The Lord Lieutenant of Hertfordshire.

With plans to expand into exporting different waste types including wood and Solid Recovered Fuel (SRF) used in the cement manufacturing process and working alongside the construction of UK CHP plants, Andusia RFL are confident that the next 5 years will prove to be even more rewarding.

Director, Steve Burton stated “Whilst RDF exports into the historical European countries looks to have started to level-off, there are still significant opportunities further afield for both RDF and other secondary fuels, particularly SRF. There is also a steadily developing market for waste fuels in the UK, which after a slow start is now really gaining serious momentum, and Andusia is in an excellent position to assist CHP developers secure the specific fuel supply they require.”

Andusia has grown tremendously in the last five years and continues to go from strength to strength. We wish to take this opportunity to thank all of those that have helped us get to where we are here today and look forward to continuing and expanding those successful relationships in the coming years. 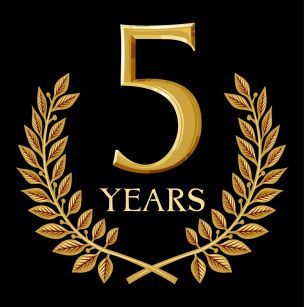