Andusia on the UK Capacity Gap and Infrastructure

This month, Mark Terrell, Andusia’s new General Manager presented at the recent RDF Conference in London. For those of you who were unable to attend the event, this is a summary of Mark’s presentation and the discussion around UK Capacity and Infrastructure in the RDF market.

Following recent reports in the trade press that the RDF exported tonnage figures seem to have plateaued, many UK exporters have responded with an opposite opinion. Andusia have announced a number of new contracts, have extended their team by 4 people and are as busy as ever. However, although less RDF may be being exported there is still a demand and expansion across the UK is required in order to meet this demand.

Figures show that landfill in the UK is beginning to decrease, and although we are building new plants in order to treat our own waste, there are still not enough, causing a capacity gap.

But why is there a capacity gap in the UK?

Gaining planning permission for new plants in the UK is very difficult. London, the South East and major cities are finding this particularly difficult. It is less of an issue in more industrial areas, such as the North East, Yorkshire and Avonmouth.

Technology selection is another issue for new EfW plants in the UK, conventional EfW methods and gasification are proven successful, however techniques such a Pyrolysis and Bio-refineries still have a long way to go.

Finally, and perhaps the most critical cause of the capacity gap is the need for a 10 year waste supply contract in order to gain investment for a new plant. Investors are looking for a fixed price, volume and term, something that many of the large Tier 1 companies are not willing to take the risk on.

This is where Andusia, as an aggregator, is able to step in bridge the gap between waste suppliers and plants. 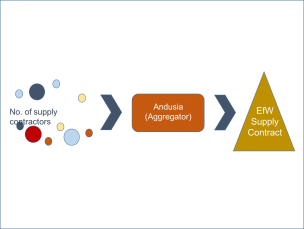